Silvia Gatti McArthur holds a degree in Medicinal Chemistry and Pharmaceutical technologies and is a certified Pharmacist (Italy). She specialized in Neuropharmacology/ Neuroimmunology at the Mario Negri Institute, Milan, Italy and then received her PhD in Neurochemistry and Neurotoxicology at the University of Stockholm, Sweden with a thesis on cytokines and fever. Silvia has held appointments as a senior research fellow in the Department of Ophthalmology and Circadian Neurosciences at the University of Oxford between 2014 and 2018.

Silvia has extensive experience in major international pharmaceutical companies. She began her career as senior molecular biologist / bioinformatic expert in Pharmacia in Milan. She subsequently led a screening /in vitro neurobiology unit in Pharmacia and Upjohn specialized in Alzheimer research and complement cascade. During her tenure at F. Hoffman-La Roche in Basel, she was Project Leader and Vice-Director in the Psychiatry section. Her activity was was devoted to the discovery and early development of ligands for mGluRs, neuroprotection and thermoregulation, sleep and circadian rhythm , GTPases and autism spectrum disorders.

Silvia was appointed as Department Head of Neuroscience in Pierre Fabre Laboratories in 2015. There she she led the discovery and early development of compounds for neurologic and psychiatric indications up to Phase II completion. She has authored over 70 papers and 40 patents and has worked in more than 100 research projects during her career. Silvia holds a diploma for Advanced Studies in Pharmaceutical Medicine at the European Center of Pharmaceutical Medicine (ECPM) of the University of Basel –prestigious institution providing continuing professional development within the pharmaceutical industry. 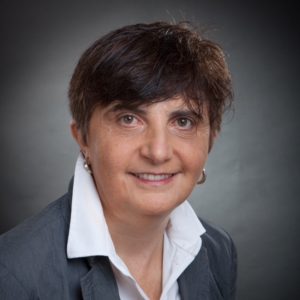